Physical force to do what is right? 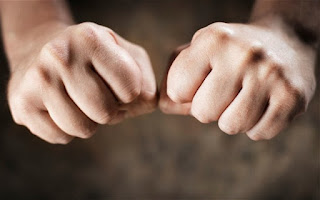 Physical Force to do what is right?

Was Jesus a 'pacifist?'  Did he ever use physical force to do what was right?

Probably one of the most socking stories of Jesus for so many people, is him driving out the money changers in the Temple.  He does this twice!  The first is at the very beginning of his ministry…and the second is almost exactly three years later at the end of his ministry (the same day as His triumphal entry into Jerusalem).

The question that comes to mind…is physical force ever appropriate in doing what is right?
The answer is difficult and easy at the same time.

If I were to ask you if it is morally right to physically stop an attacker of a young child, everyone would say “Of course it is.”  Most people, even self-proclaimed pacifists would never stand next to this act of evil, and just calmly say “Sir…please stop what you are doing….sir…stop…please…”  Of course not!  We would physically get involved.  (I deal more with this idea in another blog about “self-defense.”)  Okay…so most would confess that there are indeed SOME instances where physical force is necessary.

Perhaps what makes this story of Jesus so startling…was that it was not an obvious act of evil….at least to everyone else there.  It had become common place and accepted.
Jesus saw it for the evil it was, and responded…not just with words…but with actions.

For some…the only application they can make today is ‘Don’t sell things at church.’  But that is not even the point of his anger.  Rather…it was Evil masquerading as Righteousness.  Now THIS is something that certainly is all over our society.

So…is physical force acceptable to stop that evil?  That’s where it becomes tricky.
Some say, “It was Jesus. He was God, so he can do that type of thing…but we never could.”  But that breaks down, when the goal of how Jesus lived was to be an example to his disciples…and us…at least in principal.
But of course the other end of the spectrum…so that physical violence is always okay.  Some have taking this to mean…that blowing up abortion clinics is justified.  But that certainly doesn’t match what Jesus was showing us.

Allow me to make some observations first about Jesus’ situation.
1.        It was in the passion of the moment.  Jesus’ anger wasn’t premeditated.  It was in response to something right in front of Him.  Jesus always knew that evil was taking place…but didn’t go out of his way, or change his ministry, to confront it.
a.       When we see evil in front of us…what is…or should be…our response?
2.       Secondly, people were more startled than hurt.  Now, I have no doubt Jesus actually whipped some people (God (including the Angel of the Lord…the Pre-incarnate Jesus)…plainly injured and killed people in the Old Testament.  So what would make him hesitate from bruising a few backsides here?)  But clearly ‘hurting’ people was not the goal.  Rather, it was to stop evil.
a.       What evil should we stop when it happens right in front of us?
3.       Thirdly, it was supposed to be the most holy place on the earth.  This was THE Temple of God…a place where God was to be worshiped (even though the Holy Spirit no longer resided in this temple, as He did the first temple).  And the picture of people using it for earthly gain, was just too much to bear.   Certainly there are those in the past who have done just this…turning the worship of God…into profit.

Is there a scenario today that matches what Jesus did?  Obviously there is nothing that matches perfectly.  I hesitate to give specific examples…because every situation is so different.  But maybe the principals above will help us recognize them when we see them.  Perhaps you will come across a time that does justify a physical reaction.  Perhaps the Holy Spirit will move in you to do something about it.

Jesus’ passion surprised His disciples.  Our passion for righteousness should also stand out in our lives.
Posted by The Source at 10:13 PM No comments:

The Source
Our mission is to expect life change by devoting ourselves to God's Word, Community, Worship, and Prayer.

Our vision is to provide a daily environment where ordinary people encounter an extraordinary God.